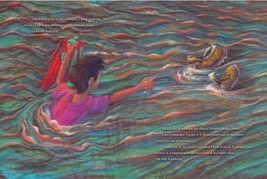 * A pair of shoes serves as the constant in a grueling trek across three borders.
Young René and Papá together begin a northbound journey, by foot and bus, away from their native El Salvador. As they cross into Guatemala, then Mexico, and finally the United States, the story repeats a chorus of “Uno, dos, tres,” representing the number of borders they must cross. It is uncertain whether the father-son team is crossing these borders with required documentation until they are waist-deep in a rushing river before joining Mamá on the other side. If there’s a moment when readers realize the perils of their journey, it’s here. Nevertheless, Colato Laínez handles the narration gently. Framing the narrative deliberately and at the center of Vanden Broeck’s illustrations are René’s shoes, often depicted from low angles or bird’s-eye views. Brush-stroked spreads depicting various landscapes—lush, green scenes, muddy trails, mountains, cities, the river—are reminiscent of Central American artwork often depicted on murals, souvenir trinkets, or postcards. Not until the last spread does Vanden Broeck finally unveil René’s smiling face in its entirety. The bilingual narrative is told in short sentences and enlivened with repetition, running metaphors, and sound effects, easily engaging readers.
Inspired by the author’s own story, this tale of a young boy’s arduous escape serves as a crucial, insightful, and timely light shone on a sensitive, highly relevant subject. (author’s note) (Bilingual picture book. 6-10)- Kirkus Reviews- Starred Review

* A boy and his father trek from El Salvador to the United States in the bilingual tale of Mis zapatos y yo. René is excited to begin the long walk with new shoes sent all the way from the US where his mother waits. Textured illustrations focus on the footwear from clever perspectives as they become ragged and worn, but the excitement remains as the family is reunited, their shoes tied together and carried in hand. Foreword Reviews


-On My Shoes and I
This moving, heartfelt tale of courage and perseverance will be embraced by a wide audience of readers, young and old.—Marilyn Taniguchi, Beverly Hills Public Library, CA- School Library Journal

"We are almost there! Sí se puede!"